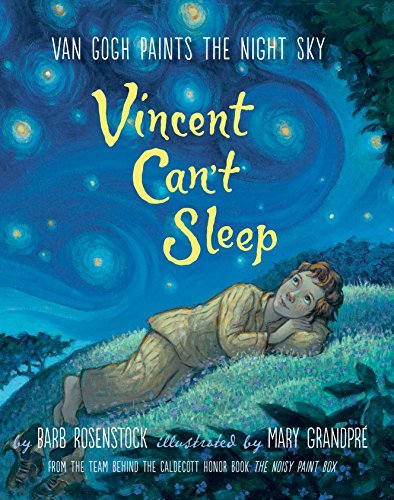 **Description from Amazon: A gorgeous, lyrical picture-book biography of Vincent van Gogh by the Caldecott Honor team behind The Noisy Paint Box.   Vincent can’t sleep . . . out, out, out he runs!               flying through the garden—marigold, geranium, blackberry, raspberry— past the church with its t...

**Description from Amazon: A gorgeous, lyrical picture-book biography of Vincent van Gogh by the Caldecott Honor team behind The Noisy Paint Box.

Vincent can’t sleep . . .
out, out, out he runs!
flying through the garden—marigold, geranium, blackberry, raspberry—
past the church with its tall steeple, down rolling hills and sandy paths meant for sheep,
He dives at last into the velvety, violet heath, snuggles under a blanket of sapphire sky,
and looks up, up, up . . . to visit with the stars.

Vincent van Gogh often found himself unable to sleep and wandered under starlit skies. Those nighttime experiences provided the inspiration for many of his paintings, including his most famous, The Starry Night. Van Gogh sold only one painting in his lifetime—but he continued to pursue his unique vision, and ultimately became one of the most beloved artists of all time.

From the same team behind the Caldecott Honor Book The Noisy Paint Box, Vincent Can’t Sleep is a stunning book that offers insight into the true meaning of creativity and commitment.

Praise for The Noisy Paint Box:

“Even those who aren’t inspired to visit a museum will take away the lesson of Kandinsky’s life: Listen to what excites you and follow its call.” —The New York Times

* “Rosenstock’s prose strikes a balance between lightheartedness and lyricism. GrandPré’s paintings conjure up an entire epoch . . . breathing life into all the characters.” —Publishers Weekly, starred

* “The rich word choice is a delight: pistachio, cobalt, and saffron introduce readers to colors while hissing, blaring, and whispering reveal the sounds of the colors. . . . This is a beautiful blend of colors, music, and life.” —Booklist, starred

* “A rich, accomplished piece about a pioneer in the art world.” —Kirkus Reviews, starred

* “The book offers diverse potential for different types of study, whether one is reading for information or for pleasure. Outstanding.” —School Library Journal, starred