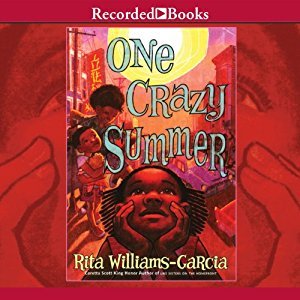 NARRATED BY: Sisi Aisha Johnson, DIRECTIONS: Buy the Kindle version for $1.99, then select "Add Audible narration for $2.99" BEST FOR AGES: Publisher recommends grade 4-7-- I have not read this book yet, but it has won quite a few awards and has been recommended to me numerous times

In this Newbery Honor novel, New York Times bestselling author Rita Williams-Garcia tells the story of three sisters who travel to Oakland, California, in 1968 to meet the mother who abandoned them.

Eleven-year-old Delphine is like a mother to her two younger sisters, Vonetta and Fern. She’s had to be, ever since their mother, Cecile, left them seven years ago for a radical new life in California. But when the sisters arrive from Brooklyn to spend the summer with their mother, Cecile is nothing like they imagined. While the girls hope to go to Disneyland and meet Tinker Bell, their mother sends them to a day camp run by the Black Panthers. Unexpectedly, Delphine, Vonetta, and Fern learn much about their family, their country, and themselves during one truly crazy summer.

This moving, funny novel won the Scott O’Dell Award for Historical Fiction and the Coretta Scott King Award and was a National Book Award Finalist. Delphine, Vonetta, and Fern’s story continues in P.S. Be Eleven and Gone Crazy in Alabama.

Readers who enjoy Christopher Paul Curtis’s The Watsons Go to Birmingham and Jacqueline Woodson’s Brown Girl Dreaming will find much to love in One Crazy Summer. This novel was the first featured title for Marley D’s Reading Party, launched after the success of #1000BlackGirlBooks. Maria Russo, in a New York Times list of “great kids’ books with diverse characters,” called it “witty and original.”