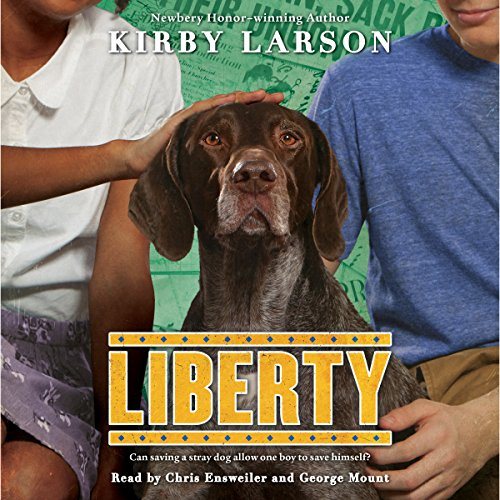 NARRATED BY: Chris Ensweiler and George Mount, BEST FOR AGES: 8+

From Newbery Honor author Kirby Larson comes the moving story of a young boy who, with a dad fighting in Europe and a sister working at the Higgins Boat factory, longs to have a dog of his own.

Fish has a knack for inventing. His annoying neighbor, Olympia, has a knack for messing things up. But when his latest invention leads Fish to Liberty, a beautiful stray dog who needs a home, he and Olympia work together to rescue her. At the Higgins boatyard, where the boats that just might save the Allied forces during World War II are built, the wartime workforce is integrated and includes women and the disabled. However, a friendship that crosses racial lines is not the norm in 1940s New Orleans.

Fish, who suffered from polio and whose dad is away fighting in Europe, looks up to Mr. Higgins, and he’s thrilled when one of his inventions helps Mr. Higgins’ engineers unlock the mechanics of the landing crafts. Mr. Higgins inspires him to be bold and brave. As Fish enlists the help of unexpected friends and allies to save Liberty, he finds his perceptions of the world – of race and war, family and friendship – transformed.