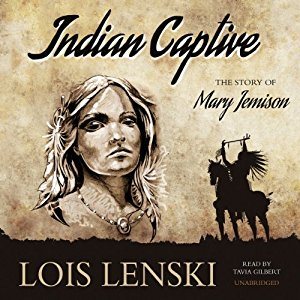 NARRATED BY: Tavia Gilbert, DIRECTIONS: Buy the Kindle version for $3.32, then select "Add Audible narration for $3.49" BEST FOR AGES: 9+

Mary Jemison has been captured by a Shawnee war party! How will she survive?

When twelve-year-old Mary Jemison and her family are captured by Shawnee raiders, she’s sure they’ll all be killed. Instead, Mary is separated from her siblings and traded to two Seneca sisters, who adopt her and make her one of their own. Mary misses her home, but the tribe is kind to her. She learns to plant crops, make clay pots, and sew moccasins, just as the other members do. Slowly, Mary realizes that the Indians are not the monsters she believed them to be. When Mary is given the chance to return to her world, will she want to leave the tribe that has become her family?
This Newbery Honor book is based on the true story of Mary Jemison, the pioneer known as the “White Woman of the Genesee.”
This ebook features an illustrated biography of Lois Lenski including rare images and never-before-seen documents from the author’s estate.
Look Inside
Disclosure of Material Connection: This page includes "affiliate links." This means if you click on the link and purchase the item, I will receive an affiliate commission. I am disclosing this in accordance with the Federal Trade Commission's 16 CFR, Part 255: "Guides Concerning the Use of Endorsements and Testimonials in Advertising." For more information about my affiliate links, click here.