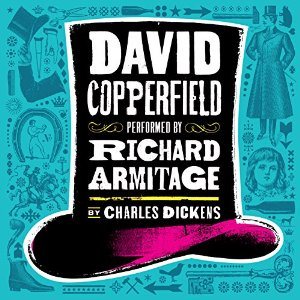 NARRATED BY: Richard Armitage, DIRECTIONS: Buy the Kindle version for .99, then select "Add Audible narration for $1.99" BEST FOR AGES: 14+

Described by the author himself as his “favourite child,” the novel David Copperfield is Charles Dickens’ draws from many of his own experiences. Virginia Woolf called it Dickens’ “most perfect” story, and for over a century and a half readers have followed the title character, a spirited young boy, as he runs away from his ghastly stepfather after the death of his mother. He stays with his memorable Aunt Trotwood, finds friendship in schoolmate Uriah and loves both naïve Dora and sensible Agnes, all while journeying toward his raison d’être: writing novels, like the indefatigable author who created him.